‘If you gave me a gun, I would finish them all’: Escape from Boko Haram

This article has an estimated read time of six minutes

Halima remembers that day all too clearly. It was 3pm and the air in her village in northern Nigeria was heavy with moisture.

She was giving water to her two brothers who had just arrived from Lagos. But before she could hear all their tales of the faraway metropolis, army vehicles rolled into the village.

“Lots of men dressed in uniforms got out. People thought it was the army. Then the men started shouting Allah Akbar and shooting,” she says.

“We hid inside the house. My brothers peeped out and were seen. I saw them both shot in the chest. They came inside and found my husband. They took him outside, held him down and cut off his head. Then they picked it up by the ear and flung it into the air.”

The gunmen belonged to Boko Haram, one of the deadliest terror groups on Earth. The jihadist loaded the 24-year-old, 30 other women and several children into vehicles and drove them away.

Dressed in a bright purple Hijab, Halima sits on the outskirts of a dusty refugee camp in northeastern Nigeria. After allowing herself to cry for only a minute, she composes herself and tries to recount how she escaped after six years of being Boko Haram’s slave.

In 2014, Boko Haram kidnapped 276 schoolgirls from the town of Chibok, prompting a huge international outcry. But as the world’s attention turned elsewhere, the group has continued to abduct thousands of women and girls.

Boko Haram – whose name means ‘Western education is forbidden’ in the local Hausa language – launched an uprising for an Islamic State in northeastern Nigeria in 2009.

After being driven out of Maiduguri, Borno State’s ramshackle capital, the group set up strongholds in the rough terrain of the Gwoza hills and the Sambisa forest.

Abubakar Shekau, a gangster-like cleric, became the group’s leader in 2010 and launched a sadistic campaign of terror across the Lake Chad region into southern Niger, northern Cameroon and Chad.

Despite frequent declarations of victory by the Nigerian government, Boko Haram and their breakaway group, Islamic State’s West Africa Province (ISWAP) have proven extraordinarily resilient. Reportedly, the jihadists have killed thousands of local soldiers over the last two years.

Women and girls have been at the heart of Boko Haram’s military strategy. In 2013, Boko Haram started to come under massive pressure from powerful vigilante groups. In response, Shekau sanctioned the use of girls and women as human bombs.

“They worked out that girls could get more explosives through checkpoints under their hijabs. It has been devastating. No one expected it,” says Bulama Bukarti, an analyst from the Tony Blair Institute for Global Change, who Shekau has threatened with death three times.

Abducted girls are indoctrinated with extreme violence and religious teachings for months on end. “They put you in a house for a year and brainwash you. After that, you would kill your own father,” says one survivor who was abducted when she was 12 and strapped with a suicide vest.

After being abducted and made to recite the Quran for a year and a half, seventeen-year-old Aisha, was given a choice to marry a fighter or blow herself up. “I said I would rather die than marry them,” says Aisha, a diminutive, softly spoken girl.

Fighters put an explosive jacket on Aisha and left her near an army checkpoint, saying they would hunt her down if she did not blow herself up. “All I could think about was the soldiers [who would] lose their lives. [I thought] if I do this thing, I will go directly into hellfire,” she says. 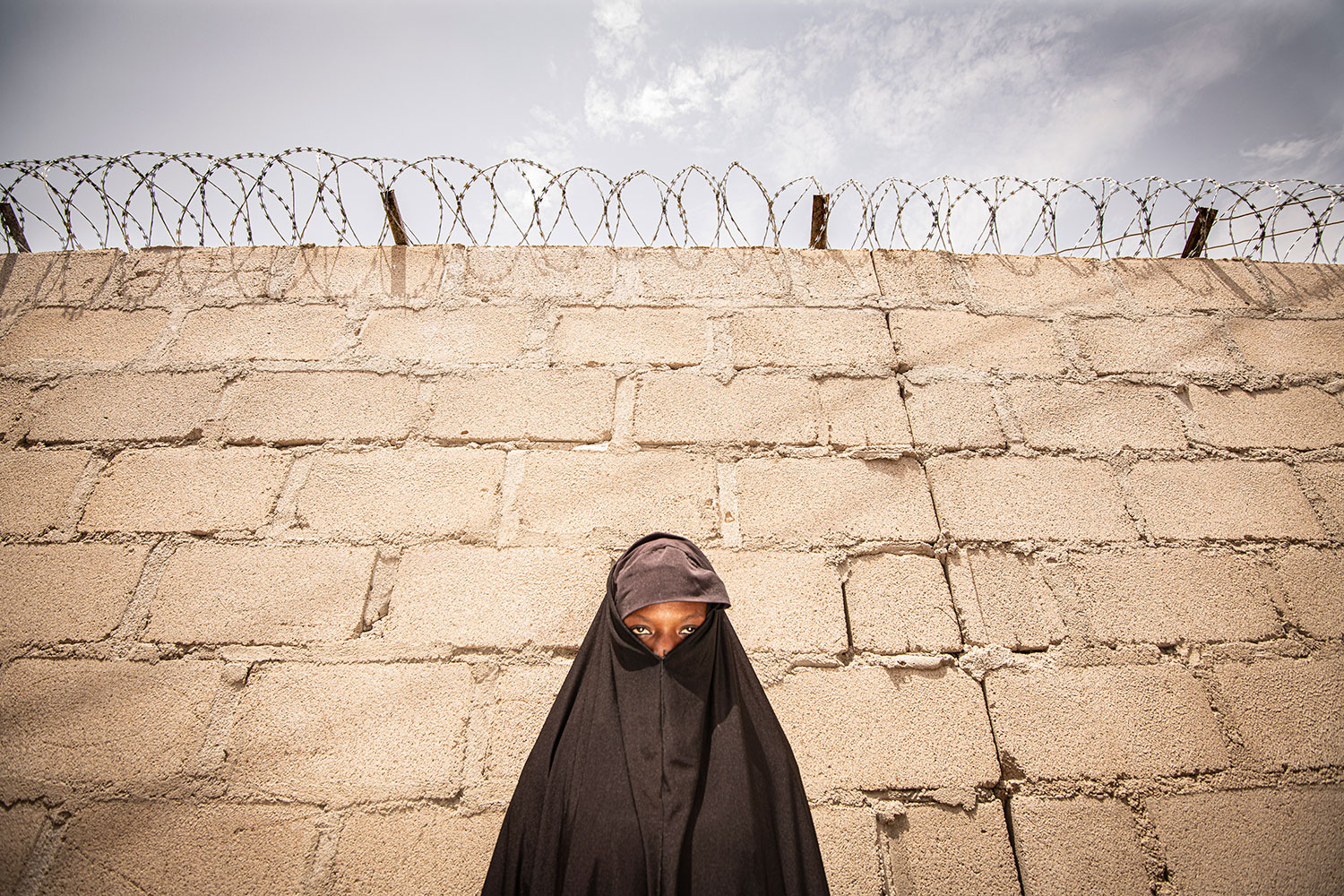 Aisha, 20, (not her real name) was abducted at the age of 16. She refused to marry so was instead forced to wear an explosive vest and told to detonate it at an army road block

At the checkpoint, she started to cry out for help. “Three soldiers came to help me take the bomb off. They said: ‘don’t cry, nothing will happen to you’,” says Aisha. “If I saw Boko Haram again in my life and you gave me a gun, I would finish them all.”

Many others have not been as lucky. Since the first reported use of a female suicide bomber by Boko Haram in June 2014, hundreds of girls and women have been forced to blow themselves up in crowded markets and near checkpoints.

Survivors told The Telegraph they had seen countless men and women executed by hanging, stoning or having their throats slit for trying to escape. People are also killed in Boko Haram’s bush camps for committing moral offences like smoking or adultery.

Young girls said that they had to collect stones for the executions at first. But after a while, they were made to throw the rocks themselves. One 10-year-old survivor said children were made to cut adults’ throats and drink their blood from a calabash.

Even if Boko Haram wives and children manage to escape, humanitarians say they face huge stigma when they return to society.

“The Boko Haram children are often rejected by their mothers who see them as a permanent reminder of their times in the camps. If their own mothers don’t accept them, then the community won’t either.

“Some women who have been rejected feel it is better to go back to Boko Haram. We tell these women and their children that there is hope,” says Geoffrey Ijumba, Chief of UNICEF’s field office in northeastern Nigeria.

Halima’s convoy moved through the bush for 10 days. Most of the children with them died along the way because of a lack of water, she says.

Finally, they arrived at the Shekau’s camp in the Sambisa forest. The camp was filled with hundreds of fighters and made up of mud huts with thatched or metal roofs. Survivors said the camp was full of hidden defences like underground tunnels and bunkers.

The women were raped by any man who wanted them and made to recite radical interpretations of the Quran. They were married off to fighters. “If you refused, they made you a slave for sex and hard labour,” Halima says.

In a desperate attempt to make herself less attractive to the men, she pretended to be mad. It worked for a year, but eventually, they forced her to marry a fighter, who raped and beat her.

When Halima became pregnant, she decided she had to escape with her unborn child, even if she died trying.

She tried to run away several times, but she didn’t know the area and every time she was caught, locked up without food and left with only a wrap to cover herself. 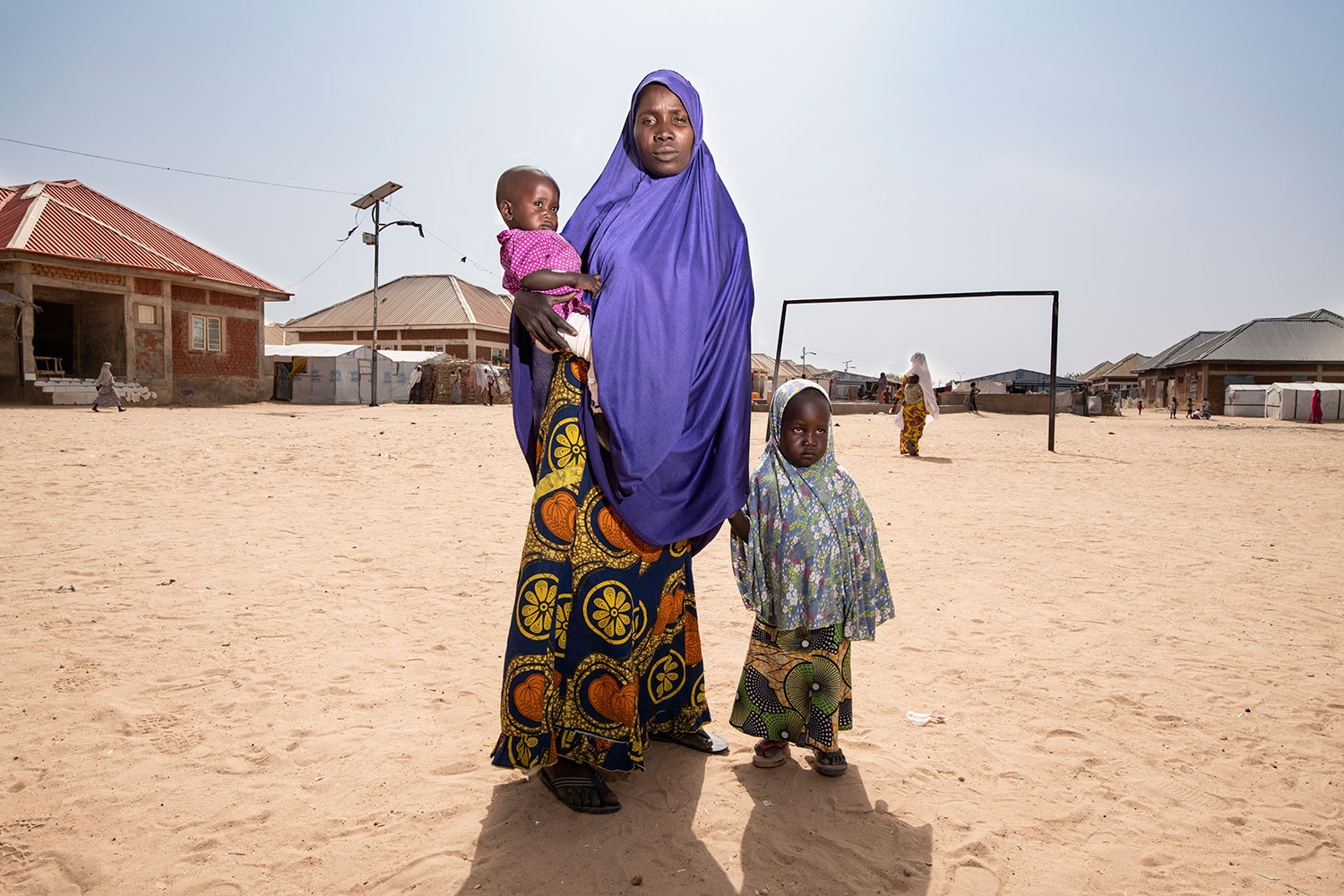 Halima with two of her children. She escaped Boko Haram after being held captive for four years

“After the third time, they said they would pass judgement and kill me,” says Halima matter-of-factly.

Knowing that she would almost certainly be killed with his unborn child, her jihadi husband decided to help her.

With his help, she managed to get out along bush trails. She walked for ten days into Cameroon, where she gave birth to twins.

Halima is deeply traumatised from her experience. When she eventually was taken to a camp for displaced people, she barely ate for months.

Pulling down her veil, Halima shows the clear outline of a bullet still lodged in the left-hand side of her back from one of her escape attempts.

“They are not human beings,” she says, looking down at the floor. “I am scared they will not forget about me. They chopped my husband like a block of wood.

“Everything I ever had is gone.”

*Names have been changed to protect identities